Key efficacy data for ILARIS in the treatment of FMF, HIDS/MKD, TRAPS and CAPS.

Efficacy in FMF, HIDS/MKD and TRAPS

ILARIS can help FMF, HIDS/MKD and TRAPS patients to achieve a rapid and complete response1

At week 16, significantly more patients receiving ILARIS had a complete response* vs placebo.1

In an exploratory analysis, including those who received a blinded dose increase of ILARIS to 300 mg every 4 weeks before day 29, significantly more patients achieved a complete response* with ILARIS than with placebo at week 16.1

Proportion of patients who had a complete response* at week 16, including those who received a blinded dose increase of ILARIS to 300 mg every 4 weeks

A randomised, double-blind, placebo-controlled study to evaluate the efficacy and safety of ILARIS in patients with crFMF (n=63), HIDS/MKD (n=72) and TRAPS (n=46). The trial consisted of one cohort per disease. Each cohort followed the same study design:

Patients received 150 mg (or 2 mg/kg†) SC of ILARIS or placebo every 4 weeks. All patients were eligible for a blinded dose increase (to ILARIS 300 mg SC) if they had a persistent baseline flare between days 8 and 14 (PGA score ≥2, or CRP >10 mg/L with <40% reduction from baseline) or a lack of resolution at day 15 (resolution was defined as a PGA score <2 plus a CRP ≤10 mg/L or a reduction by ≥70% from baseline). After day 29, patients were eligible for an open-label increase in the dose if they had a flare (PGA score ≥2 and CRP ≥30 mg/L).‡

A randomised withdrawal and open-label period of 24 weeks.‡

ILARIS can help CAPS patients to achieve a rapid, complete and sustained response2 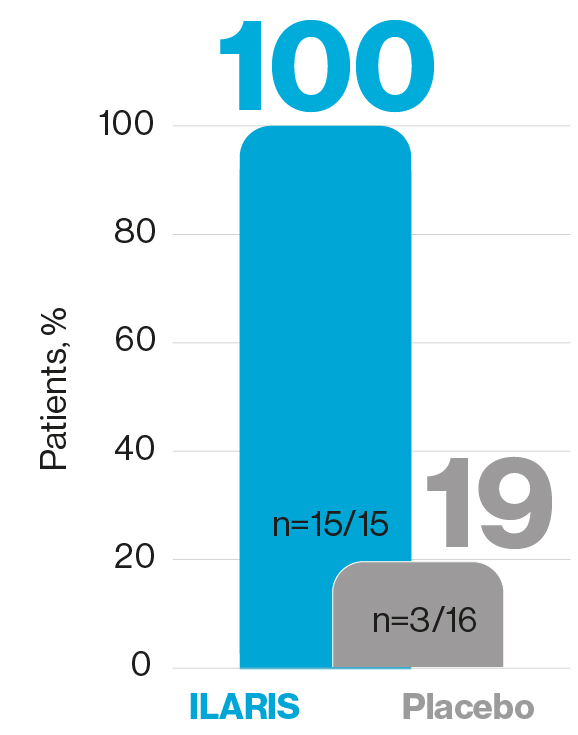 The primary endpoint was the proportion of patients with a relapse of CAPS during treatment with ILARIS, as compared with placebo, in the withdrawal phase. Remission describes patients who did not have a flare in this phase.2§ 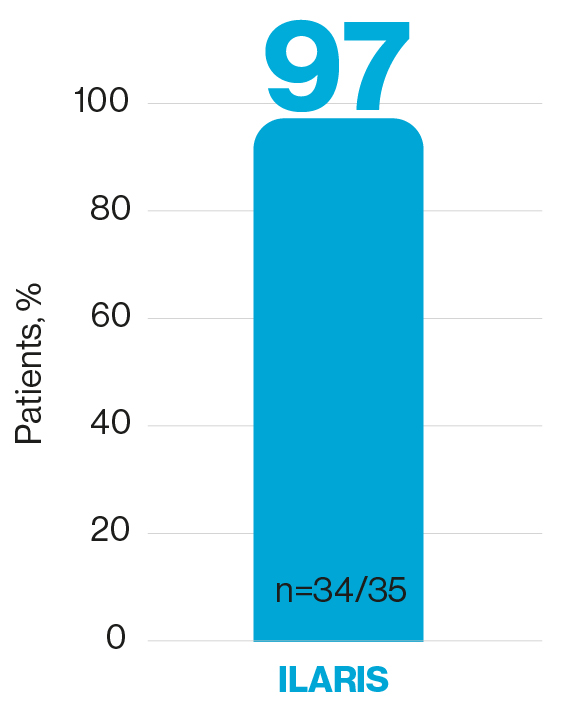 A multicentre, randomised, double-blind, placebo-controlled study of ILARIS for the treatment of CAPS. Eligible patients (aged 4–75 years, weighing 15–100 kg) had CAPS associated with an NLRP3 mutation and required treatment (n=35). Previous treatment with anakinra, rilonacept or ILARIS was permitted if treatment had been discontinued and the patient’s disease had relapsed. The study consisted of three parts:

An open-label treatment period in which a single dose of ILARIS was administered. Response was assessed during the following 8 weeks.

A double-blind withdrawal period, in which patients who had a sustained complete response in part 1 were randomly assigned to receive either ILARIS or placebo every 8 weeks for up to 24 weeks.

At the end of part 2 or at the time of relapse, whichever occurred first, patients immediately entered the open-label part 3 of the study, in which they received ILARIS every 8 weeks for a minimum of 16 weeks, for a total study duration of 48 weeks.

The primary outcome measure was the proportion of patients with a relapse of CAPS during treatment with ILARIS, as compared with placebo, in part 2. Secondary outcome measures included the proportion of patients with a complete response in part 1, values of inflammatory markers, global assessments by physicians and patients, and safety and tolerability.

In a 2-year, open-label study of 166 CAPS patients treated with ILARIS3:

In a 152-week, open-label extension study of 17 CAPS patients treated with ILARIS4:

of patients (n=17) achieved a complete response within 72 weeks, and no new relapses§§ occurred after week 96.

An open-label, phase III study of ILARIS for the treatment of CAPS. Eligible CAPS patients were aged 3 years or older and were either ILARIS-naïve (n=109) or had been pre-treated with ILARIS in a previous study (n=57). Patients received subcutaneous ILARIS 150 mg or weight-based 2 mg/kg (body weight ≤40 kg) every 8 weeks for up to 2 years. In the case of residual symptoms, patients were maintained on a more intense dosing regimen (increased dose of SC ILARIS up to 600 mg or 8 mg/kg (body weight ≤40 kg) and/or increased dosing frequency. Assessment of complete response and relapse included ratings for disease activity, skin rash and CRP and/or SAA.

A 56-week, multicentre, open-label, phase III core study of ILARIS for the treatment of CAPS. Patients who completed the core study entered the long-term extension study, with a minimum treatment duration of 6 months and a maximum treatment duration of 24 months, until 152 weeks. Eligible CAPS patients were aged 28 days to 60 months, had confirmed NLRP3 mutations and weighed ≥2.5 kg. Previous treatment with the anti-IL-1 agents anakinra or rilonacept was permitted provided these were discontinued prior to the baseline visit and the patient demonstrated active disease prior to enrolment. Patients received subcutaneous ILARIS 2 mg/kg every 8 weeks for the entire study period (including the core and extension studies). Patients in whom a complete response was not achieved after the first dose of ILARIS, and those who experienced a relapse before the next scheduled dose, were eligible for a stepwise dose up-titration (4 to 6 to 8 mg/kg). The main objective of the core study was to assess the efficacy of ILARIS with respect to treatment response. The extension study assessed the long-term efficacy of ILARIS with respect to relapse in patients who completed the core study.

‡For some patients in the CLUSTER study, the timing of up-titration of ILARIS dose or the frequency of ILARIS administration differed from the recommendations of the Summary of Product Characteristics (SmPC). Please refer to the Prescribing Information or the ILARIS SmPC for information on posology.

**Complete response was defined as composite of PGA of autoinflammatory disease activity, and assessment of no or minimal skin disease, and CRP or SAA values <10 mg/L. PGA of disease activity was based on a composite of the following symptoms: urticarial skin rash, arthralgia, myalgia, headache/migraine, conjunctivitis and fatigue/malaise.2

ILARIS is indicated for the treatment of the following autoinflammatory periodic fever syndromes in adults, adolescents and children aged 2 years and older:

This site contains information for healthcare professionals about ILARIS. END_OF_DOCUMENT_TOKEN_TO_BE_REPLACED

Key safety data and dosing information for ILARIS in the treatment of FMF, HIDS/MKD, TRAPS and CAPS. END_OF_DOCUMENT_TOKEN_TO_BE_REPLACED