When a patient’s adverse events are effectively managed, then a return to the starting dose, via dose escalation, can be considered in the same step wise approach done for dose reductions1,2

Specific guidelines are available on the management of pyrexia, a common adverse event of TAFINLAR + MEKINIST treatment1,2

This key information on managing side effects that may occur while patients are being treated with TAFINLAR + MEKINIST may be helpful when discussing this with your patients.

Visit the section on dosing and administration, for details on initiating and maintaining treatment, and on how to administer the combination.

Adverse events associated with TAFINLAR + MEKINIST are well-established and are generally similar in both the metastatic and adjuvant settings3,4

TAFINLAR, in combination with MEKINIST, is indicated for:

Whilst TAFINLAR + MEKINIST is likely to cause patients to experience some side effects, it has a well-established side effect profile which is generally consistent across the metastatic and adjuvant settings.3,4

Dose modification schedule based on the grade of adverse events excluding pyrexia1,2

Dose modification for only one of the two treatments

TAFINLAR and MEKINIST should be simultaneously dose reduced, interrupted, or discontinued. Exceptions, where dose modifications are necessary for only one of the two treatments, are shown in the table below.1,2

Cases where dose modifications are necessary for only one of the two treatments1,2

See the TAFINLAR and MEKINIST SPCs for further information on dose adjustments.

Dose modifications or interruptions are not recommended for incidences of cutaneous squamous-cell carcinoma or new primary melanoma.1

When a patient’s side effects are effectively managed, then a return to the starting dose via dose re-escalation can be considered in the same step wise approach as for dose reductions.1,2

Pyrexia was the most common adverse event observed in Phase II and III clinical trials of TAFINLAR + MEKINIST.3-6

During clinical trials, the majority of pyrexia events were mild or moderate (Grade 1 or 2).*3-6

Only 2.4% (13 of 552) discontinued treatment with TAFINLAR or MEKINIST due to pyrexia6

Patients may respond well to dose interruption (TAFINLAR when used as monotherapy, and both TAFINLAR + MEKINIST when used in combination) and supportive care for management of pyrexia, allowing later re-initiation of treatment.1,2,6

The diagram below outlines the recommended approach to managing a pyrexia event that the healthcare team who manages a patient’s care should be aware of. 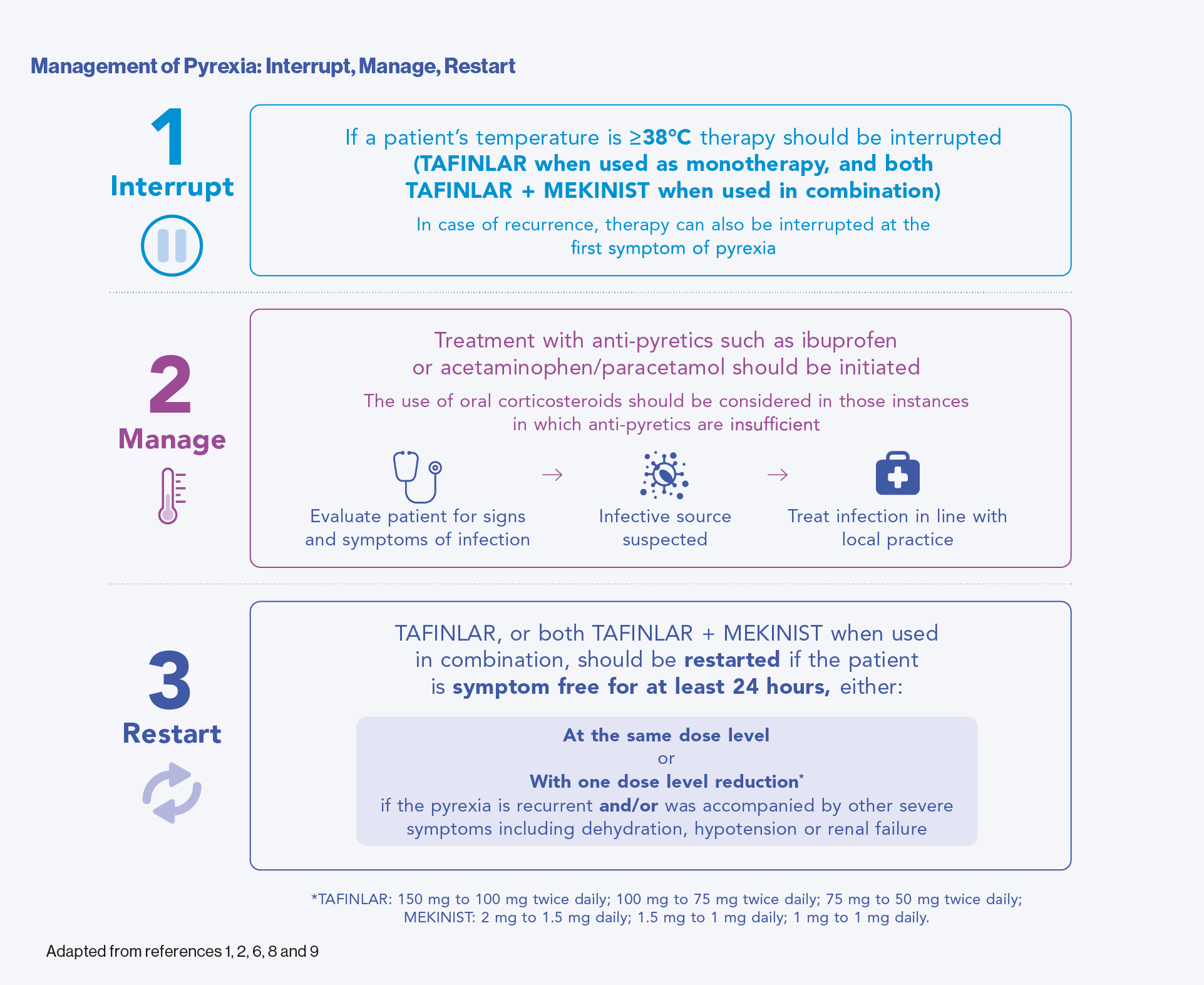 Management of Other TAFINLAR + MEKINIST Side Effects

In patients with melanoma, adverse events in the adjuvant setting (COMBI-AD trial) and metastatic setting (COMBI-v and COMBI-d trials)4,5 were similar and the most common adverse events observed with TAFINLAR + MEKINIST in Phase III studies (occurring with an all-Grades incidence of ≥20%) included: pyrexia, chills, fatigue, headache, nausea, vomiting, diarrhoea, arthralgia and rash.4,5

Further information on managing side effects

Practical advice for patients on managing side effects can be found here.

Always encourage your patients to carefully read the Patient Information Leaflets (PILs) in their TAFINLAR and MEKINIST packs before starting treatment, as they contain important information for them.1,2

Additional information is also available from your Novartis representative who can provide you with a comprehensive healthcare professional brochure about TAFINLAR + MEKINIST.

Click here to preview and request a guide on pyrexia, the most common side effect related to treatment with TAFINLAR + MEKINIST.1,2